Whilst most of Shelley’s Fine Art photographs take many hours to construct with careful use of natural light, this image has taken the longest to create. 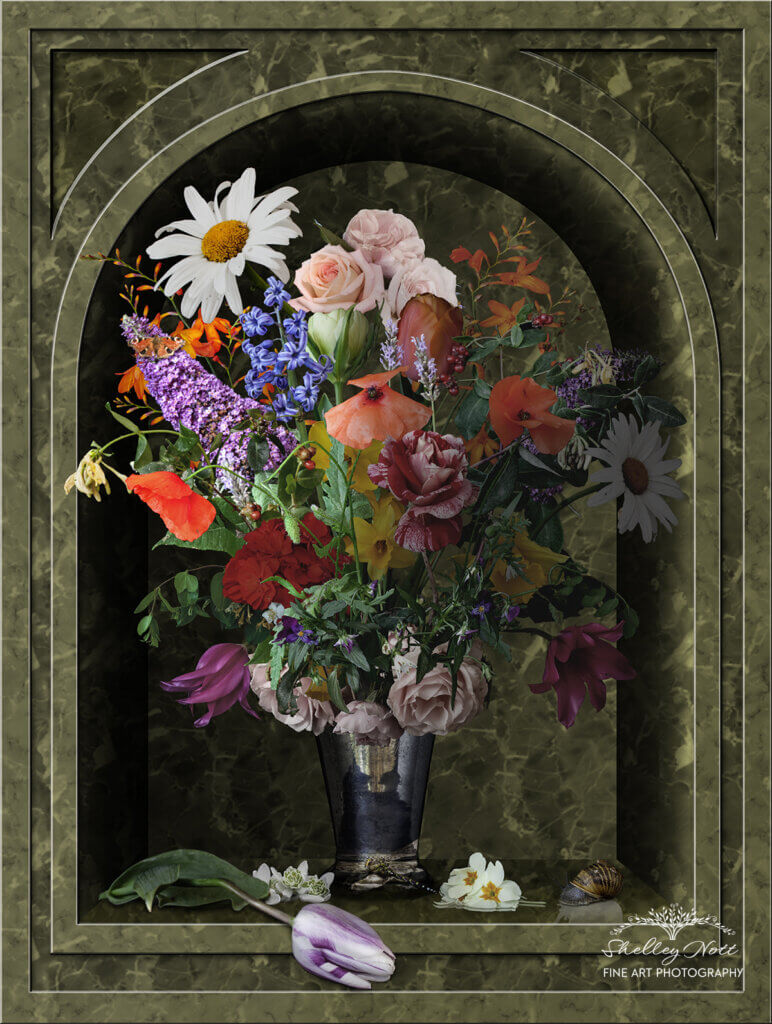 Flowers in a Silver Vase

In the 17th Century the Dutch Masters painted spectacular floral arrangements, which would include flowers that were never in season at the same time. It necessitated a painstaking process of creating small studies of the flowers as they bloomed with the final composition being painted when all these had been completed. Ambrosius Bosschaert the Elder (1573-1621) was a supreme exponent of this style of painting, with elaborate arrangements often being painted on copper.

This picture is an homage to Bosschaert.

This image took more than 24 months to come to fruition. Each component was photographed independently, starting with the snowdrops in February 2015 and ending with the snail in May 2016. The photograph of each flower was then placed in the arrangement creating a bouquet, which could never actually exist in reality. Every photograph was planned in great detail ensuring the size of each flower was accurate in relation to the others and the vase that held it. 54 layers have been used to create the final image, with each element requiring many hours’ work. The multiple shoots and the extensive editing resulted in over 180 hours being dedicated to this one piece so far.

The last printed version was on Aluminium Dibond with archival quality ink. The version shown here has yet to be printed. © Shelley Nott 2021

We use cookies on our website to give you the most relevant experience by remembering your preferences and repeat visits. By clicking “Accept”, you consent to the use of ALL the cookies.
Cookie settingsACCEPT
Manage consent

This website uses cookies to improve your experience while you navigate through the website. Out of these, the cookies that are categorized as necessary are stored on your browser as they are essential for the working of basic functionalities of the website. We also use third-party cookies that help us analyze and understand how you use this website. These cookies will be stored in your browser only with your consent. You also have the option to opt-out of these cookies. But opting out of some of these cookies may affect your browsing experience.
Necessary Always Enabled
Necessary cookies are absolutely essential for the website to function properly. These cookies ensure basic functionalities and security features of the website, anonymously.
Functional
Functional cookies help to perform certain functionalities like sharing the content of the website on social media platforms, collect feedbacks, and other third-party features.
Performance
Performance cookies are used to understand and analyze the key performance indexes of the website which helps in delivering a better user experience for the visitors.
Analytics
Analytical cookies are used to understand how visitors interact with the website. These cookies help provide information on metrics the number of visitors, bounce rate, traffic source, etc.
Advertisement
Advertisement cookies are used to provide visitors with relevant ads and marketing campaigns. These cookies track visitors across websites and collect information to provide customized ads.
Others
Other uncategorized cookies are those that are being analyzed and have not been classified into a category as yet.
SAVE & ACCEPT
Scroll Up